A high-performance board that handles bigger waves with ease and control.

The Frother out performed our expectations, and although a dedicated small wave board, and by no means intended to be an all-rounder, it still worked better than most short-boards on the market in very small mushy surf, and surprisingly, handled barreling 6-foot surf very well, even being manageable up to 8-foot hollow surf.

Outline: The Frother has pulled in nose and pulled in curvature in the tail. This board features a highly refined tail section, with a sharp cut off square tail for radical tight “in the pocket” surfing.

The slightly wider nose outline provides better paddling power, and aids in keeping the surfer on the plane in smaller waves. This also helps to “get in early”, in hollow barreling waves without compromising performance off the lip.

Rocker: The board has quite a flat rocker, but with just enough lift in the tail and kick in the nose. It is very smoothly blended together into the mid-section for a graceful continuous rocker curve.

This was all balanced perfectly for a board that is flat enough to surf fast, without nose diving or stiffening up on hard tail driving turns.

Bottom contours: It starts with a subtle concave in the nose area, allowing the board to track and accelerate immediately. This leads to a pronounced deepening of the single concave in the center of the board, to drive hard for speed, leaning to a gradually softening concave in the tail area which fades into a flatter release, so that the water flow exits cleanly.

Rails: It has narrow but rounded rails in the nose area. There are crisp high-performance edges for full rail drops down the face of vertical waves. The rails ease off slightly into more rounded mid rail.

Going back towards the tail, the rails narrow gracefully again and sharpen into crisp clean-cut rail foils. The board has a standard square tail for volume, and fast release.

Fin configuration: This board’s fin set up has been designed to function using both standard configurations of “thruster” and “quad”.

Weight: The board average weight across the size curve ranges from 2 to 3kg 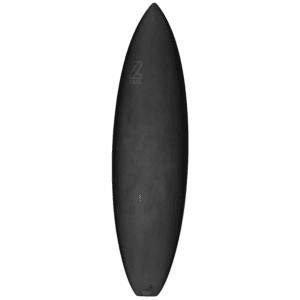