The 2021 Ghost is a further refinement of the remarkably successful design. We have made small tweaks to the design and noting new trends in board shapes filtering through the industry.

“All-Rounder” SUP foil, Wing Foil board. The Ghost is a further refinement of the remarkably successful “All-Rounder Design”

The Ghost was introduced 4 years ago and has received many design changes and updates to keep it at the forefront of the evolution of “All-rounder” Foil boards. This is our most successful foil board with over 150 boards on the water.

The Ghost has been designed as an All-Rounder Hydrofoil board for Sup Foiling and Wing Foiling. The outline profile is very efficient, has great stability and is optimised to perform well whether catching waves or generating speed to foil with the wing.

The Ghost features flat bevelled rails to reduce drag when touching the water surface while carving. She has a flat hull to make her more forgiving by not tracking when she touches down as well as been the most efficient plaining surface to reduce drag and offering great release for liftoff, including a less pronounced tail kick to be more efficient and still making it easy to trim to a foiling state.

The shorter ULTRA-LIGHT Premium Carbon sandwich Construction board reduces the boards inertia and pendulum action that delays the craft’s response while changing direction and pumping. The lightweight also increases the lift generated by the foil, allowing for bigger riders on smaller foils or lower lift-off speeds.

The twin 12” US “Twin Tracks system” AND Foot Strap Inserts are installed in a large 80Kg/m3 carbon-reinforced PVC base shaped on CNC machine. The multiple foot straps inserts have been positioned to accommodate most riding styles. 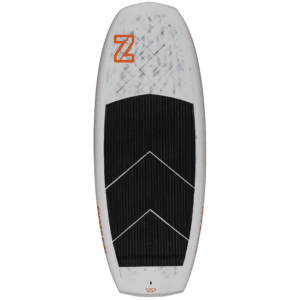